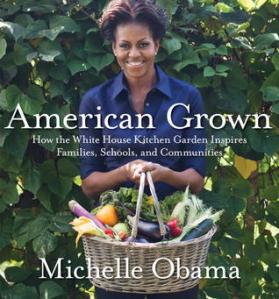 American Grown: The Story of the White House Kitchen Garden and Gardens Across America

Published in May 2012 by Crown Publishing

And the more I learned about this problem, the more I came to believe that we could solve it. This isn’t like putting a man on the moon or inventing the cell phone. It doesn’t take some stroke of genius or feat of technology. We have everything we need, right now, to help our kids lead healthy lives. Rarely in the history of this country have we encountered a problem of such magnitude and consequence that is so eminently solvable. So instead of just talking about this issue, or worrying and wringing our hands about it, we decided to get moving.

In March of 2009, First Lady Michelle Obama, along with various White House staff and volunteers, broke ground on the White House Kitchen Garden (WHKG). The purpose of the garden: to be a learning center for the public, a source of fresh food for those at the White House, and an example of what was possible for others.  This isn’t the first time that a vegetable garden was started at the White House, but the latest in a long history. John Adams, Thomas Jefferson, Andrew Jackson, and Edith Roosevelt are among the group of White House occupants who loved gardens and planted edible plants on the White House grounds.

These are some of the many facts that I learned while reading American Grown.  Horticulture in America has changed a lot since the first White House garden and not always for the better. American Grown is about what has changed and also the beacons of light that are shining throughout the country.

When I started reading this, I didn’t know what to expect. Would this book be mostly about politics or all the things that the administration has done? Nope. I was happy to say that though the author is a very famous American, the people and places she highlights aren’t.

The book is divided by seasons and readers learn all about the WHKG including the people who help to maintain it like the White House beekeeper and chefs, National Park gardeners, and volunteers. Readers learn from this group what exactly they do for the WHKG and how they do it. The book is filled with photos of the volunteers and how the garden changes through the seasons.

American Grown focuses a lot on the WHKG but the book is pretty much a three-in-one: history book, how-to manual, and profile of community gardens in America. The how-to part of the book gives advice on things like starting a garden, making compost, along with seasonal recipes that can be found in the back of the book.

My favorite section turned out to be the profiles of community gardens around the country. Through the profiles I learned that the P-Patch Garden in Seattle gave away more than 20,000 pounds of fresh produce in 2010 while The Rainbow Beach Park in Chicago is one of the oldest community gardens; it was first started as a victory garden during World War II. The book also made me want to pick up urban farmer Will Allen’s book, The Good Food Revolution, after learning about all the good he’s doing in Chicago. With so many negative stories in the media about virtually everything, I think it’s great to read about so many people who are inspired to help their communities thrive.

You probably can tell from reading this long review, that I really enjoyed this book. My rating: 4 out of 5 stars. Highly recommend.