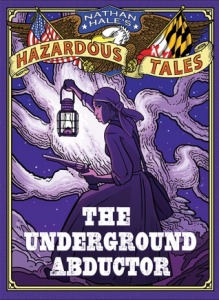 Nathan Hale’s Hazardous Tales #5: The Underground Abductor
Nathan Hale
128 pages
First published in April 2015 by Amulet Books
Where did I get this? From my local library

Growing up, I didn’t read much nonfiction. As a kid and even as a teen, I think the closest I got to reading nonfiction was with historical fiction like Lois Lowry’s Number the Stars. Kids nowadays have so many engaging non-fiction titles to choose from, that it almost makes me wish I was growing up today. Almost.

In Nathan Hale’s latest volume of Nathan Hale’s Hazardous Tales, Harriet Tubman is the subject of choice. Readers first meet Tubman as Arminta Ross, a six year-old slave who’s been rented out to a local family. When she can’t get the hang of weaving, Arminta is taught how to check muskrat traps in the swamp. The job is a cold and hard one, as the young girl catches the measles and ends up with bronchitis. After recovering, she’s hired out again and the next family isn’t any better.

Readers also see what happens when Arminta accidentally gets in the way of an irate slaveowner who tries to injure another slave. It took her months to recover from her traumatic head injury and even then, her owner tries to sell her.

After a series of events, Arminta Ross becomes Harriet Tubman, badass abductor of the Underground Railroad. She travels back and forth from the South to Canada and various places to help slaves get to freedom. The journey was so scary that Tubman really did keep a pistol on her in case someone wanted to turn back instead of completing the trip.

I was amazed at Tubman’s courage to go back and forth, helping strangers and reuniting her family. You can’t help but be in awe at her determination even as she risked her own life and freedom. I laughed at the jokes and felt sadness when Tubman was never able to rescue her sister, nieces, and nephews.

Nathan Hale does a wonderful job presenting Harriet Tubman’s life in graphic format. The story is rich with details and includes a bibliography in the back for more information. Nathan Hale’s Hazardous Tales: The Underground Abductor is a book that needs to be on the shelf of every library. It’s a book that’s perfect for readers in higher elementary school to adults. I will warn you; once you read this book, you’re going to want to reread it right away. Plus, there are four more books in the series with a sixth book being published in March 2016.