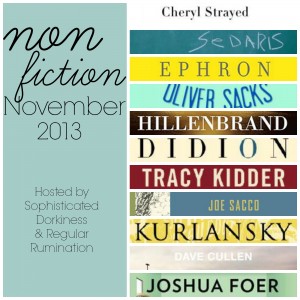 Lu of Regular Rumination and Kim of Sophisticated Dorkiness are hosting Nonfiction November, celebrating the power of nonfiction. Each week, the duo ask a particular question and participants are encouraged to answer the question and even post reviews of nonfiction.

One of the things I’ve really enjoyed about reading nonfiction is watching the emergence of graphic non-fiction. To be clear, graphic non-fiction is nonfiction narrated in a graphic format. The really nice thing about nonfiction in this format, is that there’s pretty much something for everyone. New topics and experiences are being shared in really unique ways that aren’t dictated by any rules. Below you can find a few of my favorite graphic nonfiction reads with a focus on memoirs autobiographies.

Smile by Raina Telgemeier (2010) I read Smile years ago after reading Telgemeier’s adaptation of the middle school classic series, The Baby-Sitters Club. When Raina was in the sixth grade she fell, severely injuring her two front teeth. As if sixth grade isn’t awkward enough for most people, she had to go to a lot dentist and orthodontic appointments because of the fall, while also trying to figure out who she is and where she fits in. Smile was one of the first middle school graphic memoirs I had ever seen or read. After you finish reading it, you can hand the book over to your middle schooler. My daughter enjoyed the book as much as I did.

Persepolis: The Story of a Childhood by Marjane Satrapi. (2004) Persepolis is one of those rare books that if you haven’t read, you need to go out and buy it. Now. Satrapi retraces her childhood in Iran during the Islamic Revolution and the war with Iraq. We see a young fierce girl who’s trying to stay sane in a country that was changing sometimes overnight.

Stitches by David Small (2009) Small has been one of my favorite illustrators for years as he often teams up with his wife, Sarah Stewart to create wonderful children’s books. Stitches is nothing like the light children’s books he’s co-authored. As a teen, the author was told that he needed to have surgery to remove a growth from his throat. What he wasn’t told was that his parents and doctors thought he was going to die. Secrets played a huge role in the Small family as his parents hide things from their children and each other. After the surgery, David is a mute. With the help of a therapist and new found freedom, he’s able to slowly recover and make sense of the silence of his childhood. Stitches is a powerful memoir about resilience even after being surrounded by dysfunction for so long.

March Book One by John Lewis, Andrew Aydin, and Nate Powell (2013). It always amazes me how simple an illustration can be drawn, yet still remains powerful. In March, the first book in a trilogy, Congressman John Lewis recounts his childhood as a boy living in Alabama to becoming a young man who participated in sit-ins during the Civil Rights era. 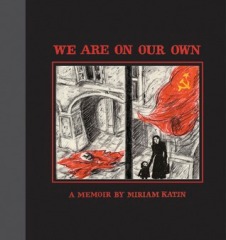 We Are On Our Own by Miriam Katin (2006). I kept going back and forth with whether or not I should add this book to my list. I finally decided I should after remembering the strong feelings I had for it. We Are On Our Own recounts Katin’s childhood as she and her mother escaped Budapest during the Nazi invasion. Drawn in pencil and told decades after the events took place, readers don’t get a full picture of everything that went on. Much of it is because Katin was just a child during this chaotic and terrible time. I found this book to be raw and powerful.

Radioactive Marie & Pierre Curie: A Tale of Love and Fallout by Lauren Redniss (2010). Has there ever been a song or book you wished you created? Radioactive Marie and Pierre Curie may be one of those creations. This isn’t your typical biography. Redniss writes about the lives of Marie and Pierre Curie but also includes anecdotes from people who have survived Hiroshima, the aftermath of Chernobyl, and other issues about the effect of radiation on people. Add that to the book’s cyanotype illustrations, photographs, and ephemera and readers get an enjoyable biography.

Feynman by Jim Ottaviani (2011) I like this book so

much that I usually reread it every year. Richard Feynman was a Nobel Prize-winning quantum physicist, adventurer, and breaker of safes. Ottaviani takes a lot of information from Feynman’s books and give readers who haven’t heard or read about the physicist, a nice introduction.

There are many books I could have added to this list but didn’t because this post is long enough as it is. Notables include: Maus by Art Spiegelman which won a Pultizer, Fun Home by Alison Bechdel, Relish: My Life in the Kitchen by Lucy Knisley, Embroideries by Marjane Satrapi, and Marbles: Mania, Depression, Michelangelo and Me by Ellen Forney.

Have you read any of these? Are there any graphic memoirs/biographies you would add to this list?