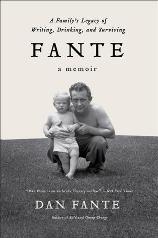 Fante: A Family’s Legacy of Writing, Drinking, and Surviving

Published in 2011 by Harper Perennial

A darkness had come to my life, a despair that only those who have known the unendingness and bottomlessness of their own psyche can understand. No matter what I did or what female hostage I took in a relationship, I knew hat sooner or later I would die from suicide.

The subtitle of the book, A Family’s Legacy of Writing, Drinking, and Surviving, gives readers a glimpse of the Fante’s history of alcohol and literature. Dan is the middle son of influential American writer John Fante, a man who had a raging battle with alcohol. John’s own father was also an alcoholic while Dan was four the first time he tried alcohol. I don’t know about you but though I was surprised at how young the author was, I’m not surprised that his first time was trying it at his parents’ house because of easy access. It’s also telling that the author describes that first time as being his “first spiritual experience”. It was decades before Dan was able to stop drinking for good but so much happened before he was able to.

While reading the first 100 pages of this book, I almost called it quits. Fante writes a lot about his father who has a bad tempered alcoholic and prone to mood swings. In the beginning John Fante was a monster of a husband and father, who for years didn’t think much about married life and less about his second son, Dan. At first, I felt like I was learning more about John than Dan. I understand that Fante is an influential American writer and he has a huge presence in his family’s lives but I wanted to know more about Dan and less background information on John. It made me think that this memoir might be better suited for people who’ve already read John Fante’s books.

I love that Dan doesn’t hold back from the ugliness of addiction. The author describes days of wicked hangovers, rages, paranoia, and intense sexual appetites. This book isn’t for the faint of heart. The great thing is that most of what’s described is necessary to understand Fante’s life at the time. He helps readers see what pushed him to start drinking when he was sober and what made him continue even though everything around him told him he needed to stop.

Brutal self-judgment clogged my mind and failures began replaying endlessly in my head, dogging me for days at a time. I was convinced that my brain was out to kill me, and would, if it didn’t have to rely on my body for transportation, More and more I removed myself from people, and fuck it became my daily marching orders. My life, my thinking, was now about keeping the secret that I was crazy. On the outside I appeared reasonable normal but the inside was a firestorm of madness. I felt as though there were a coiled spring in my head that I had to hold down, day and night.

In the end, it’s writing that saves Dan Fante and gives him peace. Gritty and honest, this book doesn’t hold back about the chaos of Fante’s earlier life or the pitfalls of addiction. Bruised, battered, and almost broken, Dan Fante shows readers that addiction can be fought and they too can survive. Rating: 3 out of 5 stars.